I’ve missed more than 9000 shots in my career. I’ve lost almost 300 games. 26 times, I’ve been trusted to take the game winning shot and missed. I’ve failed over and over and over again in my life. And that is why I succeed. – Michael Jordan

It seems to be quite a journey when you close your eyes and recall your childhood days, when you had time for everything in this world except worry, when you never had to think about your future and your professional goals; monthly pocket money was enough to keep you happy. And the moment you open your eyes all your dreams shatter in seconds, you bump into reality, and you end your day nevertheless asking for a better life each night before you fall asleep.

I have always lived on a principle that life is a journey and the destination is as important as the journey, so we must enjoy it. As Steve Jobs said, “The Journey is the reward.” However, most people I interact with have one thing in common, they all have ample time to ponder on complains and problems in life than appreciating the beauty of life and blessings they have. They have too many overarching woes that they are way too fixated on them, it seems hard to overcome that habit. And the irony is that, they are not even aware of it, because none of them realizes that they are inadvertently attuned to it.

In expecting for something better we often ignore many reasons to stay happy and when we realize it is too late and feel left out, as I mentioned in my blog “The Happiness Mantra,” that it’s the adverse circumstances that make us believe that our present circumstances were much better than our circumstances today. If you keep thinking about things that won’t change – will make no difference in your life – so it’s better not to think about problems and start concentrating on the reasons to stay happy because true happiness is being content in what you already have.

The reasons I spoke about my carefree days when I was a teenager because in retrospect when I see my life today, it seems that in a matter of few years so much has changed, so our attitude towards life. Today we need to be reminded of reasons to stay happy, yes it’s true, we need to be reminded time and again what we already have is more than enough to be content, life is too short to be complaining all the time.

Had it been the case then Mahatma Gandhi would not have become the father of nation, he would have given up when he had become jobless after completing his law degree. But he started really small, from one small assignment to South Africa to fight for the freedom of India, he managed all without fretting. He had come across the most traumatic situations in life but never gave up, in stead, he learned to deal with them with a sound mind and propagated non-violence. He always believed in maintaining his calm, that’s why when he died his last words were Hey Ram…Hey Ram…Hey Ram. This shows how content he was throughout his life.

Satisfaction lies in the effort, not in the attainment, full effort is full victory. — Mahatma Gandhi

J.K. Rowling was divorced one year after her marriage, she was jobless and helpless left with a dependent daughter when she had to move to Scotland with her then-infant daughter and three chapters of what would become Harry Potter in her suitcase. J.K. Rowling would not have become a multi-millionaire today had she become a complainer after the failure of her marriage. She was a single mother when she started testing her writing skills which eventually gave birth to Harry Potter which sold 400 million copies and became highest-grossing film series in history.

There is nothing really difficult if you only begin — some people contemplate a task until it looms so big, it seems impossible, but I just begin and it gets done somehow. – John Shaw Billing

Michael Jordan wouldn’t have become NBA’s most valuable player had he quit playing basket ball when he was left out of the varsity basket ball team because he was just 5 feet 9 inches tall. But he never gave up and practiced harder, set unbreakable records and became the greatest basketball player of all time.

Lance Armstrong would have quit biking after he was diagnosed with advanced testicular cancer at the age of 25 when doctors gave Lance Armstrong less than a 40 percent chance of recovery. But his indomitable belief in himself and the lessons which his mother, Linda Walling had taught him became his strength.

Lance sought strength in three things his mother had instilled in him:

“Make every obstacle an opportunity”, “Always work hard and good things will happen” and “Don’t believe it when other people say you can’t”.

One simple question I want each one of you reading this blog to ask yourself, “Am I Happy?” if not then ask this question every day until you find a reason to be happy.

Here is a situation, take a deep breath and imagine:

Imagine that you are a 95 years old and ready to die. Before taking your last breath, you’re given a great gift: The ability to travel back in time – the ability to talk to the person who is reading this page, the ability to help this person be a better professional and lead a better life.

The 95-year old you understands what was really important and what wasn’t, what mattered and what didn’t. What advice, to lead an eventful life, would this wise “old you” have for the “you” who is reading this page?

Take your time and answer the question on two levels: personal advice and professional advice. Jot down a few words that capture what the old you would be saying to the younger you.

Once you have written these words down, the rest is simple: Just do whatever you wrote down. Make it your resolution for the rest of the current year, and the next. You have just defined your “there.”

To get to the top of the mountain you ought to be in a mood that will ring the bells and uplift you on each move of yours, your growth is quite in line with your attitude towards life. Getting answers of all your questions is impossible until you change your state of mind.
As Einstein once said, “A problem can not be solved from the same level of thinking we were when we first created it.”

Live life to the fullest, that should be the motto of life, do good unto others and leave all your problems on God and focus on productive things in life. Life is less about worrying about things not in our control and more about taking charge of things in our control. Sometimes sharing your problems with others might make you feel light, but most often, doing it repeatedly, we don’t realize when it becomes our habit. So, in stead, of contemplating on problems we should focus on our goals and the reason to stay happy each day.

If you look around you will find many reasons to stay happy each day, like those who are able to read this blog are already gifted with 2 eyes and the brain to understand my ideology behind it. Still if you can’t then ask a blind person how it feels to have eyes through which you can see this beautiful world, ask an orphan how it feels to have your parents with you, or ask old age people living in Ashrams how it feels spending time with their grand children. You will get the answer…….

Try doing it, write down a reason to stay happy before you leave home, it will make your day light and the journey more enjoyable, life is too short to waste time in worrying, so, work hard and most of all don’t forget to enjoy the little things in life. HAVE FUN……!!!!! 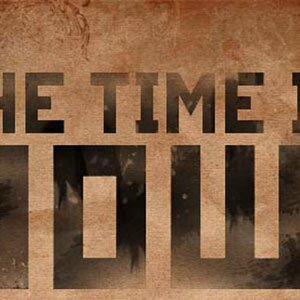 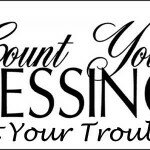 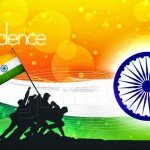 « My India, My Pride – Happy Independence Day
COUNT YOUR BLESSINGS NOT YOUR TROUBLES »